Don't forget to visit our sister blog!
Posted by nacktman at 9:41 PM No comments:

Posted by nacktman at 9:41 PM No comments:

Posted by nacktman at 9:40 PM No comments:

We're taking break today from this blog so we are posting the bare essentials. We also wanted to build up tomorrow's edition. So tune in tomorrow for all the riveting repartee ...
Posted by nacktman at 9:38 PM No comments:

Do you check your phone every 2 minutes to see how many likes your Instagram photo has? Do your tweets contain zero vowels? Are you the mayor of a dozen establihments? Your answer to these questions will determine whether or not you belong in the social media infirmary or not. Learn about the social media habits that lead to a severe social sickness and massive decrease in productivity.
Posted by nacktman at 9:38 PM No comments:

Can You Think Away Your Pain? A tantalizing new study by Clare Philips and Debbie Samson shows that some pain-sufferers can get relief by "re-imagining" their pain away:


After being interviewed about their baseline pain and their psychological state - including feelings of mental defeat, anxiety and depression - the participants were asked to select their most powerful and distressing pain-related mental image. "I see myself on all fours - like a dog but unable to move," said one. All participants spent time forming this "index image" in their mind before answering more questions about how they were feeling. Focusing on the unpleasant image increased pain and emotional distress. Remember, this is an image that the participants experienced spontaneously in their everyday lives (for nearly half of them, it came to mind several times a day).
Next, after a six-minute gap talking about where they grew up (as a distraction), 26 of the participants were taught to re-picture their pain. They were asked to think "how would you rather see the image?" and to describe in detail what this would entail. They then focused on this new image - for example, the participant above who'd previously described the dog-image now imagined: "I am at the start of a race….the gun goes off and the crowd cheers as I take off." The remaining participants acted as controls and spent the same time focused on their original, unpleasant index image.
After picturing a "re-scripted" pain image, the participants in that group experienced a dramatic drop in their pain levels. In fact, 49 per cent of them said they felt no pain at that time, compared with 11 per cent of them feeling no pain after imagining their index image.

More
Posted by nacktman at 9:37 PM No comments: 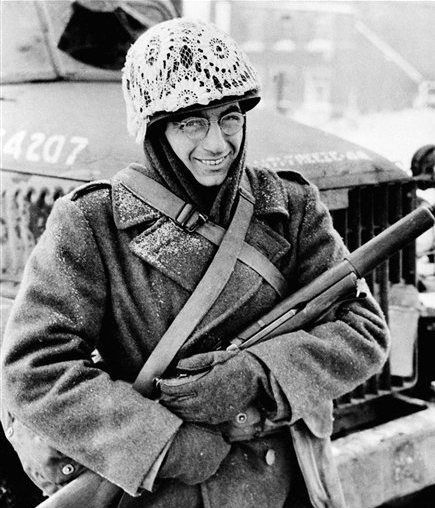 It's February, 1945. The US Army is advancing into Germany through Luxembourg. Sgt. William Furia of Philadelphia first wore his lace cozy as a joke, but then he found it offered some effective camouflage in the snowy weather.
More
Posted by nacktman at 9:37 PM No comments:

A re-enactment of the Battle of Hastings on what is believed to be the original battlefield has been cancelled because of torrential rain.
English Heritage said for safety reasons the event could not go ahead because of unacceptable levels of mud on the battlefield and public areas. Sunday's re-enactment marked the 946th anniversary of the battle when William the Conqueror defeated King Harold. 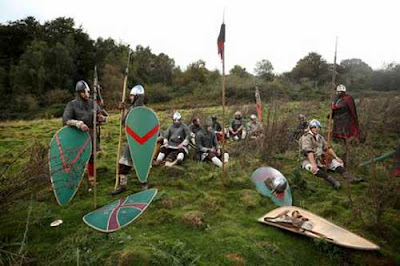 Hastings Borough Council said the cancellation was a disappointment. "It is understandable but it is a real shame because the organizers put a lot of time and money into organizing and advertising it," said spokesman Kevin Boorman.

The Battle of Hastings is re-fought every year over two days to mark the anniversary on 14 October of the 1066 victory of William, Duke of Normandy which changed English history. English Heritage said although the forecast was for fair weather over the weekend, unexpected torrential rain over several hours on Saturday forced it to cancel Sunday's performance.
Posted by nacktman at 9:37 PM No comments: 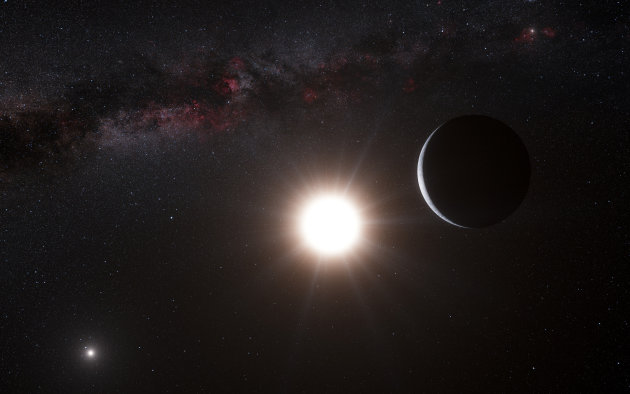 European astronomers say that just outside our solar system they've found a planet that's the closest you can get to Earth in location and size. It is the type of planet they've been searching for across the Milky Way galaxy and they found it circling a star right next door — 25 trillion miles away. But the Earth-like planet is so hot its surface may be like molten lava. Life cannot survive the 2,200 degree heat of the planet, so close to its star that it circles it every few days. The astronomers who found it say it's likely there are other planets circling the same star, a little farther away where it may be cool enough for water and life. And those planets might fit the not-too-hot, not-too-cold description sometimes call the Goldilocks Zone.
That means that in the star system Alpha Centauri B, a just-right planet could be closer than astronomers had once imagined.
It's so close that from some southern places on Earth, you can see Alpha Centauri B in the night sky without a telescope. But it's still so far that a trip there using current technology would take tens of thousands of years.
But the wow factor of finding such a planet so close has some astronomers already talking about how to speed up a 25 trillion-mile rocket trip there. Scientists have already started pressuring NASA and the European Space Agency to come up with missions to send something out that way to get a look at least.
The research was released online Tuesday in the journal Nature. There has been a European-U.S. competition to find the nearest and most Earthlike exoplanets — planets outside our solar system. So far scientists have found 842 of them, but think they number in the billions.

While the newly discovered planet circles Alpha Centauri B, it's part of a system of three stars: Alpha Centauri A, B and the slightly more distant Proxima Centauri. Systems with two or more stars are more common than single stars like our sun, astronomers say.
This planet has the smallest mass — a measurement of weight that doesn't include gravity — that has been found outside our solar system so far. With a mass of about 1.1 times the size of Earth, it is strikingly similar in size.

Stephane Udry of the Geneva Observatory, who heads the European planet-hunting team, said this means "there's a very good prospect of detecting a planet in the habitable zone that is very close to us." And one of the European team's main competitors, Geoff Marcy of the University of California Berkeley, gushed even more about the scientific significance.
"This is an historic discovery," he wrote in an email. "There could well be an Earth-size planet in that Goldilocks sweet spot, not too cold and not too hot, making Alpha Centauri a compelling target to search for intelligent life."
Harvard planet-hunter David Charbonneau and others used the same word to describe the discovery: "Wow."
Charbonneau said when it comes to looking for interesting exoplanets "the single most important consideration is the distance from us to the star" and this one is as close as you can get. He said astronomers usually impress the public by talking about how far away things are, but this is not, at least in cosmic terms.
Alpha Centauri was the first place the private Search for Extra Terrestrial Intelligence program looked in its decade-long hunt for radio signals that signify alien intelligent life. Nothing was found, but that doesn't mean nothing is there, said SETI Institute astronomer Seth Shostak.

The European team spent four years using the European Southern Observatory
in Chile to look for planets at Alpha Centauri B and its sister stars Alpha Centauri A and Proxima Centauri. They used a technique that finds other worlds by looking for subtle changes in a star's speed as it races through the galaxy.

Part of the problem is that the star is so close and so bright — though not as bright as the sun — that it made it harder to look for planets, said study lead author Xavier Dumusque of the Geneva Observatory.
One astronomer who wasn't part of the research team, wondered in a companion article in Nature if the team had enough evidence to back such an extraordinary claim. But other astronomers said they had no doubt and Udry said the team calculated that there was only a 1-in-1,000 chance that they were wrong about the planet and that something else was causing the signal they saw.
Finding such a planet close by required a significant stroke of good luck, said University of California Santa Cruz astronomer Greg Laughlin.
Dumusque described what it might be like on this odd and still unnamed hot planet. Its closest star is so near that it would always hang huge in the sky. And whichever side of the planet faced the star would be broiling hot, with the other side icy cold.
Because of the mass of the planet, it's likely a rocky surface like Earth, Dumusque said. But the rocks would be "more like lava, like a lava planet."
"If there are any inhabitants there, they're made of asbestos," joked Shostak.
Posted by nacktman at 9:36 PM No comments: