We are posting a minimum number of posts over the next few days so that the editors and staff can celebrate the various holidays and festivals occurring right now.

Don't forget to visit our sister blog!
Posted by nacktman at 10:39 PM No comments:

Is the United States Mentally Unstable?

Given that one in five Americans has some form of mental illness, how healthy are we? Read more

To Live and Die in Amewrica

One of the most poignant HuffPost headlines ever

The Huffington Post has been establishing a reputation some really powerful headline, visually powerful in fact. This one, below, is one of the most poignant they’ve done.It documents the 100 gun deaths in America in the week since Sandy Hook.

Taking Sense Away is the aptly named blog allegedly maintained by an anonymous former TSA screener. It delves into the kinds of shenanigans that go on in the image operator room where they get to see what you look like naked in the pornoscanner ("a whole lot of officers laughing and clowning in regard to some of your nude images, dear passengers"); a glossary of TSA insider jargon ("BBC: Bogus Bag Check, or Bullshit Bag Check. What happens when a not-too-bright x-ray operator decides to call a bag search."), and many other useful and enlightening posts.
Taking Sense Away
Posted by nacktman at 10:35 PM No comments:

The 5 Most Persuasive Words In The English Language

You, free, because, instantly and new are the most persuasive words in the English language. There are certain power words that hold more sway over our decision making process than others.
Simple language is crystal-clear language, and these words make it clear just what you want your reader to do. And you might be surprised just how effective these deceptively simple words can be.
Posted by nacktman at 10:34 PM No comments: 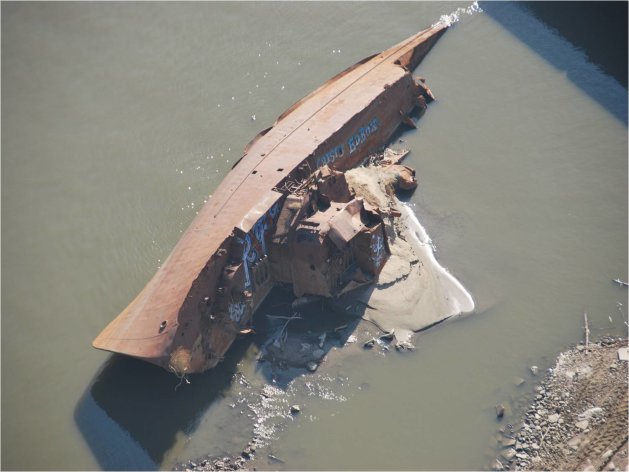 From sunken steamboats to a millennium-old map engraved in rock, the drought-drained rivers of the nation's midsection are offering a rare and fleeting glimpse into years gone by.

Lack of rain has left many rivers at low levels unseen for decades, creating problems for river commerce and recreation and raising concerns about water supplies and hydropower if the drought persists into next year, as many fear.
But for the curious, the receding water is offering an occasional treasure trove of history.

An old steamboat is now visible on the Missouri River near St. Charles, Mo., and other old boats nestled on river bottoms are showing up elsewhere. A World War II minesweeper, once moored along the Mississippi River as a museum at St. Louis before it was torn away by floodwaters two decades ago, has become visible — rusted but intact.
Perhaps most interesting, a rock containing what is believed to be an ancient map has emerged in the Mississippi River in southeast Missouri.
The rock contains etchings believed to be up to 1,200 years old. It was not in the river a millennium ago, but the changing course of the waterway now normally puts it under water — exposed only in periods of extreme drought. Experts are wary of giving a specific location out of fear that looters will take a chunk of the rock or scribble graffiti on it.
"It appears to be a map of prehistoric Indian villages," said Steve Dasovich, an anthropology professor at Lindenwood University in St. Charles. "What's really fascinating is that it shows village sites we don't yet know about."
Old boats are turning up in several locations, including sunken steamboats dating to the 19th century.

That's not surprising considering the volume of steamboat traffic that once traversed the Missouri and Mississippi rivers. Dasovich said it wasn't uncommon in the 1800s to have hundreds of steamboats pass by St. Louis each day, given the fact that St. Louis was once among the world's busiest inland ports. The boats, sometimes lined up two miles deep and four boats wide in both directions, carried not only people from town to town but goods and supplies up and down the rivers.
Sinkings were common among the wooden vessels, which often were poorly constructed.

"The average lifespan of a steamboat on the Missouri River was five years," Dasovich said. "They were made quickly. If you could make one run from St. Louis to Fort Benton, Mont., and back, you've paid for your boat and probably made a profit. After that, it's almost like they didn't care what happened."
What often happened, at least on the Missouri River, was the boat would strike an underwater tree that had been uprooted and become lodged in the river bottom, tearing a hole that would sink the ship. Dasovich estimated that the remains of 500 to 700 steamboats sit at the bottom of the Missouri River, scattered from its mouth in Montana to its convergence with the Mississippi near St. Louis.
The number of sunken steamboats on the Mississippi River is likely about the same, Dasovich said. Steamboat traffic was far heavier on the Mississippi, but traffic there was and is less susceptible to river debris.
Boiler explosions, lightning strikes and accidents also sunk many a steamboat. One of the grander ones, the Montana, turned up this fall on the Missouri River near St. Charles. The elaborate steamer was as long as a football field with lavish touches aimed at pleasing its mostly wealthy clientele. It went to its watery grave after striking a tree below the surface in 1884.
The U.S. Coast Guard and Army Corps of Engineers urge sightseers to stay away from any shipwreck sites. Sandbars leading to them can be unstable and dangerous, and the rusted hulks can pose dangers for those sifting through them.

Plus, taking anything from them is illegal. By law, sunken ships and their goods belong to the state where they went down.
While unusual, it's not unprecedented for low water levels to reveal historic artifacts.
Last year, an officer who patrols an East Texas lake discovered a piece of the space shuttle Columbia, which broke apart and burned on re-entry in 2003, killing all seven astronauts aboard. And the remains of a wooden steamer built 125 years ago recently were uncovered in a Michigan waterway because of low levels in the Great Lakes.
But treasure hunters expecting to find Titanic-like souvenirs in rivers will likely be disappointed if they risk exploring the lost boats.
"It's not like these wrecks are full of bottles, dishes, things like that," said Mark Wagner, an archaeologist at Southern Illinois University-Carbondale. "If there was anything on there in the first place, the river current pretty much stripped things out of these wrecks."
Such was the case with the USS Inaugural, a World War II minesweeper that for years served as a docked museum on the Mississippi River at St. Louis. The Great Flood of 1993 ripped the Inaugural from its mooring near the Gateway Arch. It crashed into the Poplar Street bridge, and then sank.
In September, the rusted Inaugural became visible again, though now nothing more than an empty, orange-rusted hulk lying on its side not far from a south St. Louis casino.
Posted by nacktman at 10:32 PM No comments: