Don't forget to visit our sister blog!
Posted by nacktman at 10:20 PM No comments: "That 1992 vintage of McDonald's McJordan BBQ sauce, which was on eBay yesterday, has actually been sold to an anonymous buyer in Chicago, Illinois for the "Buy it Now" price of $9,995."
Posted by nacktman at 10:18 PM No comments:

It’s come to my attention that you have misrepresented me several times during the presidential campaign. I am writing to ask you to cease all such activity immediately.

You have claimed that I could add between $7 trillion and $8 trillion to the U.S. budget without increasing the deficit or raising taxes on someone other than the wealthy. I’m good, but not that good. I’ve searched my multi-millennial archives from Algebra to Quantum Theory to Zoological Science and conclude I have never done anything remotely close to what you’re describing. Ever. I can’t. It violates my basic principles as well as my professional reputation.

Given the adverse publicity it’d cause at this sensitive time, I’d like to keep the lawyers out of it. Just stop saying things about me that aren’t true, OK? If you’re not sure, run it by my staff beforehand.

I’ve worked hard for thousands of years to develop the trust humanity places in me and I’ll not have it fuzzified or tarnished by anyone who’ll die long before I will.

So gays caused the Holocaust…


“Hitler recruited around him homosexuals”

Bryan Fischer of the officially-designated hate group, American Family Association, did the interview with the Costello. Fischer is perhaps best known for promoting the idea that gays were behind the Holocaust.  Fischer’s radio show is a frequent stop for repugican leaders and political candidates.  Costello was aware of Fischer’s odd views on Hitler, and read Fischer’s quote back to him:


“Hitler recruited around him homosexuals to make up his Stormtroopers, they were his enforcers, they were his thugs. And Hitler discovered that he could not get straight soldiers to be savage and brutal and vicious enough to carry out his orders, but that homosexual solders basically had no limits and the savagery and brutality they were willing to inflict on whomever Hitler sent them after. So he surrounded himself, virtually all of the Stormtroopers, the Brownshirts, were male homosexuals.”

CNN’s Carol Costello.
Did Fischer repudiate the quote? Oh no. He defended it.

Thanks for sharing your views, I guess.

Fischer then went on a tear about the Southern Poverty Law Center – he’s upset that the SPLC recently designated a number of extreme religious right groups as official “hate groups.”  Here’s the end of the interview, after she reads the Hitler quote – it’s priceless.


CNN’s COSTELLO: I would think most historians would take issue with that. But what I’m saying to you is that, by many people’s standards, would be hate speech.
AFA’s FISCHER: Well, but the reality is, it’s the Southern Poverty Law Center.  They’re out to destroy the AFA and the FRC (Family Research Council), that makes them the bullying group, that makes them the hate group.  They’re the ones that want to silence any view that would criticize the normalization of homosexual behavior.  And we know from the CDC, and from the FDA, not part of the vast rightwing conspiracy…
COSTELLO: Well…
FISCHER: …that homosexual behavior has the same health risks…
COSTELLO: …okay…
FISCHER: …associated with it…
COSTELLO: That, that’s just not true. I’m gonna end this interview now, sir, I’m sorry, because that’s just not true.  Mr. Fischer, um, thanks for sharing your views. I guess.

Oh, and here's the binders full of women tumblr

And speaking of which, Romney was lying

Here's 20 ways being a liberal has made life better

Did the average Neanderthal know she had a brother-in-law? In an interview with The Houston Chronicle, paleoanthropologist Jean-Jacques Hublin hits on an interesting point that I don't think we (the media and laypeople) consider enough when we talk about our closest ancient relatives. Although we have an increasingly deep picture of Neanderthal anatomy and genetics, that doesn't necessarily tell us a great deal about their biology.
Truth is, for how little we understand the wiring and functioning of our own brains, we understand even less about the Neanderthal mind. It's quite possible that they could mate with us, but couldn't think the same way we do. And it's those unseen, unstudied differences that could really account for the vast disparities that we see between how humans lived and how their Neanderthal neighbors lived.


The picture we have so far is that the Neanderthals are sort of opportunistic, good at hunting middle- to large-sized mammals. They have a territory in which they probably go through a cycle of habitation in different places, basically when one place is exhausted they move to another one. What we don't see with Neanderthals is long-distance exchanges with other groups. What we see with modern humans in the same areas is different. For example, we find shells in Germany coming from the Mediterranean or from the French Atlantic Coast. It means there was a network of people. So, the question is, what kind of relationship did a Neanderthal have with his brother-in-law? Humans did not just live with their families and their neighbors, but they knew they had a brother-in-law in another village, and that beyond the mountain there is the family of their mother, or uncle, or something like that. There is a large network of groups that, if necessary, could help each other. I think this is where we would like to go to find differences between Neanderthals and modern humans.

Read the full interview at The Houston Chronicle
Posted by nacktman at 10:03 PM No comments:

A family in Portland, Connecticut, is thanking their rescue dog for saving their infant daughter's life.  "If Duke hadn't been so scared, we would have just gone to sleep," said Jenna Brousseau. 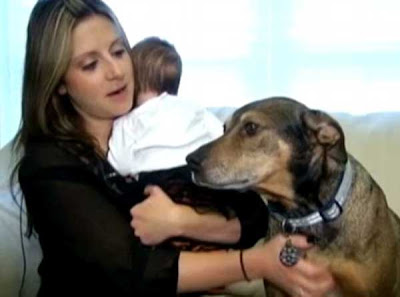 On Sunday night, Duke, who was adopted nearly six years ago, jumped on the Brousseau's bed and was shaking uncontrollably, enough to wake them up. "He is insanely obedient, so this is extremely bizarre," Brousseau said.

The Brousseaus said Duke has never acted like that before and knew something was wrong. When they went into their 9-week-old daughter Harper's room, she was not breathing. "My husband called 911 and the ambulance came here and it was because of our Dukey dog, who alerted us," Brousseau said.

Harper was taken to an area hospital after being revived by paramedics.  "I tell him all the time, 'You were born in mommy's heart,' just because he was so meant to be ours," Brousseau said. The family wanted to share their story because they wanted to inspire others to consider rescuing an animal like they did.
Posted by nacktman at 10:03 PM No comments: