As The World Turns

As The World Turns

The president slips unannounced into the war zone and presses the nation’s leader.
U.S. impatience
Also:

A 16-year-old enters a "mariners' graveyard" on her record quest to circle the globe.
Controversy follows her
Also:
Sri Lankan Tamil refugees spend six months in a leaky boat
Around 240 asylum seekers will pass a sad milestone this week: six months in a leaky boat. It was late September or early October when the Tamils boarded the rickety Jaya Lestari 5 bound for Christmas Island and, they hoped at the time, new lives in Australia.

But then fate - and Kevin Rudd - intervened. Learning the boat was on the way, Mr Rudd phoned Indonesian President Susilo Bambang Yudhoyono and asked him to stop it in Indonesian waters. The Indonesian Navy apprehended the boat and took it to the Javan port of Merak on October 11.

But the Sri Lankans - then numbering 254, including 31 children - refused to get off the boat, fearing they'd have to wait years for resettlement if their refugee claims were processed in Indonesia. They vowed to stay put until another country offered to take them in. 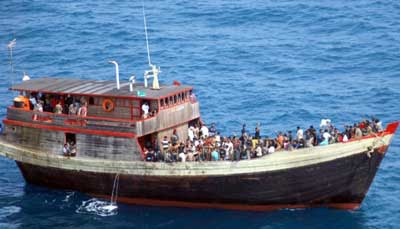 Indonesia promised the Tamils it would not force them off the boat. Besides, it didn't (and still doesn't) have anywhere to put them. So the stalemate began. And half a year later, there's no sign it will end anytime soon.

Conditions on the overcrowded boat are deplorable. The Tamils share a single toilet. Dozens have fallen ill, some seriously. One 29-year-old man died from a stomach illness in December.

A handful of the original 254 have left the boat voluntarily and at least two have been arrested after wandering away from the boat. Australia, meanwhile, has washed its hands of the problem, insisting it has no legal obligation to help the Tamils.

Colombian rebels handed over a 23-year-old soldier to the International Red Cross on Sunday in their first release of a captive in more than a year.
Full Story