A teenage school boy was allegedly tattooed against his will by a group of fellow students who told him they would stop bullying him if he agreed to be inked. The 14-year-old boy, from the US state of New Hampshire, had the words "Poop Dick" and a drawing of a penis tattooed on his backside on May 10 after being enticed to a home in the city of Concord.

The boy, who suffers from learning disabilities and self-esteem issues, allegedly told police he was warned by one of the assailants that "he was going to get the tattoo whether he liked it or not" and that "he would not be picked on anymore if he got it done." The students allegedly threatened to beat him up if he tried to run away. 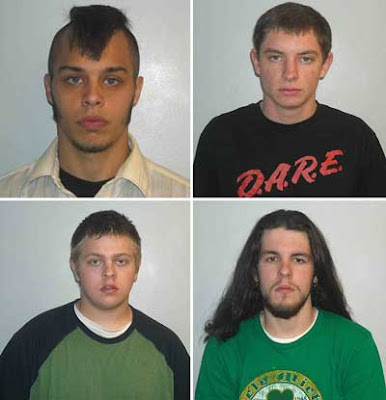 None of the arrestees knew the victim's name, referring to him in police interviews as "Poop Dick" or "Spiderman", a nickname he was given after wearing a Spiderman hat to school one day. The boy was "frequently targeted for ridicule," investigators said.

A raid on the Concord home led to the seizure of tattoo equipment and the arrest of four out of five of the victim's alleged assailants. The four were charged with a variety of crimes, including assault, endangering the welfare of a minor and tattooing without a license.
Posted by nacktman at 10:09 PM