A Chinese farmer is fighting off property developers who want his land, firing rockets from a homemade cannon made out of a wheelbarrow and pipes. Yang Youde, who lives on the outskirts of the bustling city of Wuhan, in central Hubei province, said he had fended off two eviction attempts with his improvised weapon, which uses ammunition made from locally sold fireworks.

"I shot only over their heads to frighten them," he told the China Daily of his attacks on demolition workers sent to move him off his land. "I didn't want to cause any injuries." 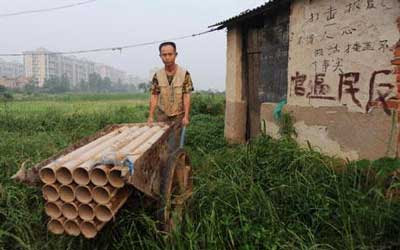 The rockets, which can travel over 100 yards, exploded with a deafening bang, the official paper added. It did not say if anyone had been injured. His approach is more aggressive than most, but Mr Yang's problem is a common one.

Anger over property confiscation is one of the leading causes of unrest in China, with many people forced to give up homes and land to make way for anything from roads to luxury villas. 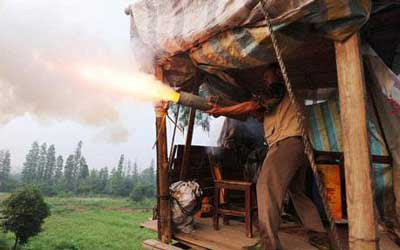 Mr Yang said the local government had offered him 130,000 yuan (£13,000) for his fields, on which they want to erect "department buildings". He said the land is worth five times that amount.

Construction ditches have already been dug across the land of less obstinate neighbours. A first eviction team attacked Mr Yang in February after his rockets ran out, but local police came to his rescue. In May he held off 100 people by firing from a makeshift watchtower.
Posted by nacktman at 10:36 PM