They say you can lead a horse to water … but this blind mare is being led everywhere by a one-eyed companion who has become her protector. Angel, a 12-year-old rescue horse, has formed a remarkable bond with Tarna, who shadows her everywhere and gently guides her away from danger. The pair have become inseparable since meeting at The Horse Trust animal sanctuary in Buckinghamshire.

Angel is fully reliant on Tarna because she lost her sight when she was starved to within an inch of her life at Spindles Farm, Bucks. The case sparked the largest ever RSPCA equine welfare operation and led farmer James Gray, 47, to be fined £600,000 and banned from keeping horses for life. Angel is now shadowed every second of the day by Tarna, 28, who herself has only one eye after she was impaled on a metal spike. 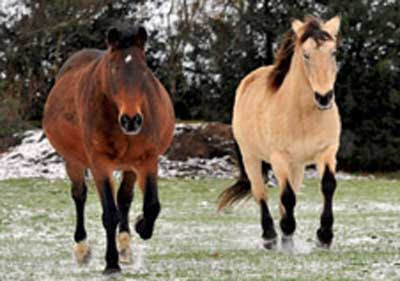 Susan Lewis, marketing manager at The Horse Trust, the world’s oldest horse sanctuary, described the unlikely friendship as ”remarkable”. She said: ”How Tarna knows Angel is blind we’ll never know. She literally shadows Angel everywhere and they go. Between the two of them they have just the one eye – it’s incredible. Maybe Tarna, because she has one eye, realized Angel was blind. We don’t know. Wherever they go Tarna is there with her good left eye looking out for both of them.

”The two have developed a firm friendship and are now inseparable – Tarna will dig her feet in or cry out if a groom tries to separate the two. Tarna is very protective of blind Angel, leading her to food, defending her from other horses and acting as a physical shield from obstacles. Once when we separated them so Angel could have her sight tested Tarna was pawing at the door and they were crying out to each other. It was quite distressing. It’s incredible to think where they’ve both come from and now, together, there is no reason why they can’t live a happy life.”
Posted by nacktman at 10:20 PM