This one is gruesome – a man in the Philippines taking a picture of his family ended up taking one of his killer as well. Here’s what the man’s last photo showed:


The picture, taken outside the man’s house in Manila, shows a man aiming his gun from behind the victim’s smiling three-member family, seconds before he was shot.
The relatives – Reynaldo Dagsa’s wife, daughter and mother-in-law – are seen standing beside the family car, which has its lights on, and the gunman, wearing a baseball cap, is bracing himself against the vehicle, pointing his gun at Dagsa. His face is slightly obscured by the gun. In the right-hand corner of the photograph is a man police identified as the assassin’s lookout.

A local councilman shot to death on New Year's Eve in the Philippines accidentally photographed his killer pointing a gun at him just before pulling the trigger. In the photo above, victim Reynaldo Dagsa's smiling family members are posed against a car; the alleged killer is at left, and an alleged lookout is at right. The photo led to the arrest of two suspects, one of whom was a car thief out on bail, presumed to be looking for revenge against Dagsa.

More at the Washington Post, and still more at The Inquirer
Man jailed for 99th time in 30 years
William Bradley Bankston has an unwanted record. The 47-year-old has been to the Mobile County Metro Jail in Alabama at least 99 times in the last 30 years - more than anyone else in the modern era of record-keeping.

At least three-quarters of those bookings followed drinking bouts and public displays of drunkenness, records show. 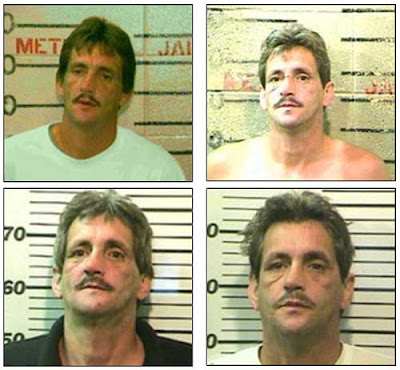 The Press-Register interviewed Bankston in early February last year, following his 97th visit to the jail. When the reporter inquired whether he had, in fact, been jailed that many times, Bankston replied, “Oh, probably more than that, ma’am.” Just two weeks after the Press-Register article on Bankston, he was arrested and booked into the jail yet again.
Posted by nacktman at 9:01 PM