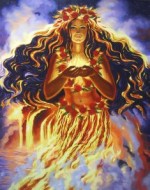 You know about the Roman gods our planets are named for, and their earlier Greek counterparts, but how much do you know about Hawaiian mythology? For example, there’s Kamoho, the leader of the shark gods.


Kamoho was the brother of the fire goddess Pele and was considered the guardian god of the Hawaiian Islands. He alone of all Pele’s relatives tried to aid her when she was seeking to avoid her marriage to the boar god Kamapua’a. Kamoho also ruled over the shark-men, or “were-sharks” as I call them. These beings were greedy humans cursed by Kamoho to periodically transform into sharks. They could be recognized by the large shark tattoos that Kamoho branded onto their backs.

Read about the other ten at Balladeer's Blog.
Posted by nacktman at 9:03 PM