Squirrels running around inside the walls of Robert Hughes’ Richton Park townhome the past few weeks were driving him nuts. So he decided to smoke them out on Tuesday. “It sounded like a whole family of squirrels,” Hughes said. “It was kind of nerve-racking.” But Hughes’ plan backfired. Now, he and his family and a neighbor are out, along with the squirrels. The townhome caught fire after Hughes lit a smoke bomb in a gutter near the hole the squirrels used to access his home. No one was injured, but Hughes’ unit and a neighbor in the building in the 3000 block of Euclid Court were badly damaged.

Firefighters responded to the blaze at 10 a.m. and had to rip open the roof and drywall in Hughes’ unit and an adjacent one to extinguish the blaze quickly, Richton Park Deputy Fire Chief Rodney Wilson said. Windows from the home were broken, the screens were torn off the frames, and there was rubble inside both residences. Hughes’ unit also had visible fire damage running up the side of the building to the second floor. Battalion Chief Jimmy Ross said Hughes told him he lit a smoke bomb in his gutter and then his house was on fire. “It’s dangerous,” Ross said. “Any kind of bomb is dangerous. A smoke bomb or whatever.” 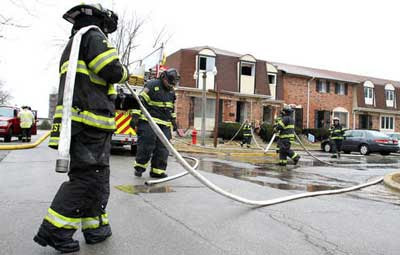 Hughes said he was outside when he saw smoke. His wife, Kay Hughes, was inside the townhome with their 2-year-old boy when the fire started and they fled immediately. “God is good and our family is safe. Hallelujah,” Kay Hughes said, adding that they will be staying with family in Richton Park. Ellen Cooke, 77, who lives in the unit next door, said she fled her house with her daughter-in-law when she started “smelling some different fumes.” Her unit didn’t sustain fire damage but was partially damaged in the firefighting effort, and she will be staying at a relative’s house in the area.

Cooke said the incident left her “frustrated.” “I’ve lived here about 30 years, and there’s a lot of things inside that I cherish, and now I know those are things I can’t get out,” she said. Yet Cooke felt sympathy for Hughes, saying she knows a thing or two about squirrel infestations. “I lived in the city, and I had squirrels in my walls, and it was aggravating getting them out,” she said. “I’m not so much angry as much as I feel sorry for the couple next door because they’re a struggling young couple.”
Posted by nacktman at 10:50 PM