A farmer from central China has discovered his mystery illness was caused by a bullet inside his brain 23 years after it lodged there. Wang Tianqing was suffering from symptoms that had grown progressively worse over two decades, but when he finally visited the doctor, the cause came as a surprise. CT scans showed a bullet inside his head. 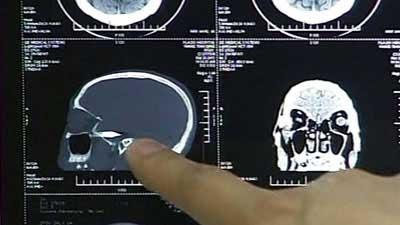 The Chinese surgeon who removed it says Mr Wang cheated death by a matter of millimeters. "The bullet penetrated his skull and then stopped near his temple," said neurosurgeon Wang Zhiming. "If it had moved a bit further backward and to the right, he wouldn't have survived."

But what puzzled Mr Wang's doctors was exactly how the bullet got there, until the patient remembered a day in 1988. Mr Wang recalled feeling a heavy blow to his head before losing consciousness. "I thought I'd been hit by a slingshot," he said. "I saw a man standing on a hill and thought he'd hit me."

He woke up in hospital, where the medical staff could find nothing wrong. They gave him an anti-inflammatory and sent him home but shortly afterwards he began having occasional convulsions. When they worsened last year, Mr Wang's family decided it was time to get a second opinion. The bullet has now been removed, and the convulsions have stopped for the man from China's northern Hebei province.