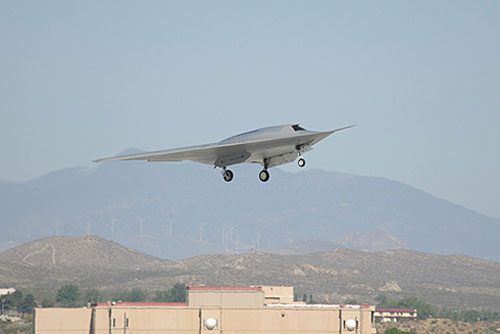 The US military is making ever more use of unmanned fighters and intelligence
gathering aircraft. The great thing about this type of aircraft is that they can loiter over some far away battlefield for a long time, and if they are shot down, no lives are at risk. The Being Phantom Ray Stealth UAV made its first flight this week and is on its way to becoming the first stealth UAV in the arsenal. The Phantom Ray is the size of a fighter aircraft, and its maiden voyage took it to 7,500 feet and a speed of 178 knots.


“The first flight moves us farther into the next phase of unmanned aircraft,” said Craig Brown, Phantom Ray program manager for Boeing. “Autonomous, fighter-sized unmanned aircraft are real, and the UAS bar has been raised. Now I’m eager to see how high that bar will go.”

Did bin Laden raid reveal new helicopter?
Some experts believe a previously classified stealth craft went down in the compound assault.
The evidence
Also:
Posted by nacktman at 8:53 PM