Man in court after reporting theft of cannabis plants from home

A man is facing jail after he reported the theft of cannabis plants from his own home. Police were called to David Williamson's home to investigate reports that he had been assaulted and robbed. But Williamson made a hash of things by volunteering that the stolen property was two of his prized cannabis plants. Officers then got a warrant to search the 34-year-old's Edinburgh home and discovered a further 20 plants.

The robbery victim was then arrested and taken to a police cell, Edinburgh Sheriff Court heard. Williamson admitted producing a controlled drug at his Sighthill home in May this year. Fiscal depute Dev Kapadia said the circumstances leading to Williamson's arrest were "rather bizarre". He added: "The police had received an anonymous call reporting a disturbance. And when they arrived at the scene Williamson talked to the police. He said he had been the subject of an assault and robbery and some cannabis plants had been stolen from him. 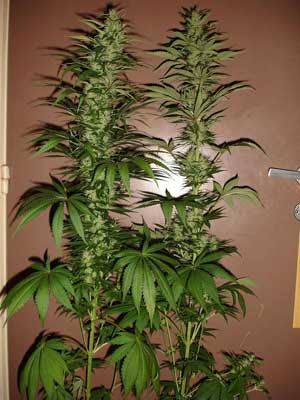 "Police officers then took the view that there may be some production ongoing and obtained a warrant." Mr Kapadia said 20 plants, some seedlings and cultivating equipment were recovered in his home. His lawyer offered no explanation for Williamson's unprompted confession to the police who went to his home. But he revealed his client, who suffers from Hepatitis C, was an authority on cannabis.

He said: "During the course of the interview with police my client demonstrated a remarkably detailed knowledge of cannabis - the different strains and the different purposes to which it could be put. Mr Williamson discovered that if he grew a particular strain he could suppress the Hepatitis C. His position is that when he is given the opportunity to do so he is hoping to live ln Holland, where all these activities are lawful and where he can treat himself without breaking the law." Sheriff Isabella McColl deferred sentence for reports until next month.
Posted by nacktman at 9:25 AM