An Islamic court in northern Nigeria's Zamfara state has sentenced two youths to amputation of their right hands for stealing a bull. The court ruled that the wrists of Auwalu Abubaka, 23, and Lawalli Musa, 22, should be amputated in public.

Amputations under Islamic law are rare in Nigeria and the court said the men could appeal against their sentences. Nigeria's government recognizes aspects of Islamic law in its 12 mainly Muslim northern states. 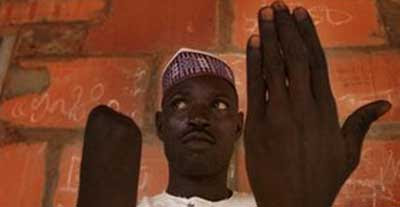 Judge Muhammadu Abubakar, hearing the case in the village of Nassarawan Mailayi, said Abubaka and Musa had pleaded guilty to stealing the bull from a local resident. "Based on the admission of guilt by the two of you of trespassing into the house... and stealing a bull whose worth is well above the minimum value to warrant amputation, I hereby order that each of you should have his right wrist amputated," Judge Muhammadu Abubakar told the convicts.

The bull was valued at $867 (£544), reports say. The sentence would take place on "market day [8 October] for members of the public to witness", Judge Abubakar said. The judge, however, gave Abubaka and Musa the right to appeal against the sentence.
Posted by nacktman at 11:00 PM