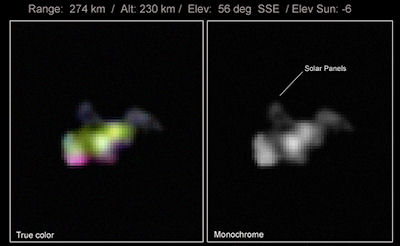 The Russian Mars probe has been stranded in low-Earth orbit following an engine failure almost immediately after launch on November 8. Now, a Dutch skywatcher has photographed the troubled probe.

Astrophotographer and veteran satellite spotter Ralf Vandebergh tracked Russia's Phobos-Grunt spacecraft as it passed over the southern Netherlands last Tuesday. Using a 10-inch telescope and a video camera, he snapped a series of images at a range of about 170 miles.
Posted by nacktman at 7:58 PM