Police in Portland, Oregon, shut down the Burnside Bridge and detained 13 bearded men who said they were headed to a photo shoot to raise money for breast cancer research on Wednesday evening. 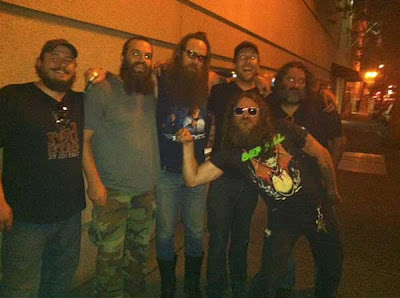 According to spokesman Robert King, police received a report that a man on the bridge had an assault rifle. Officers shut down the bridge just after 7:30 p.m. while they investigated. Police found 13 bearded men, many of whom wore military style uniforms. One of the men had an assault rifle, King said. They were taken to the Central Precinct. It's unclear if the assault rifle was loaded.

Several of the men said they were on their way to take a photo under the "Portland, Oregon" sign near the Burnside Bridge to raise money for breast cancer research. The men said the photo was going to be part of a Beards for Breasts calendar. "It's from Seattle," said Jedediah Aacker. "This girl, Sugar June, does it. She puts together a calendar for all the beard clubs around the nation. Beards for breasts." Someone called police when they saw one of the men holding a rifle on the bridge.

"We were wearing camo gear and stuff walking up to do the shoot and sure enough police show up, boom, arrested us," said Aacker. "We were just a bunch of dudes walking across the bridge wearing camo getting rad." King said two of the men were arrested and charged with disorderly conduct for handling the rifle. It's unclear if any of the other men were charged with a crime. The men said there were 10 of them. Police said 13 were detained. The bridge was opened at around 8:15. "We didn't mean to shake up the community or shut down the Burnside Bridge," said Matthew Jenkins. "Just trying to save boobs, you know?"
Posted by nacktman at 11:16 AM