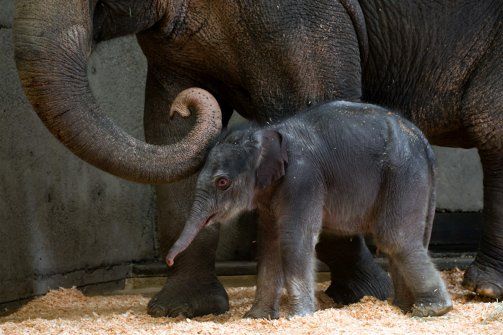 A new baby elephant was born Friday at the Oregon Zoo. The calf, a female, is doing fine so far. But animal rights activists discovered that although the mother belongs to the zoo, the actual owner of the yet-unnamed baby is  the private elephant ranch Have Trunk Will Travel. That discovery sparked such an outcry that the zoo felt compelled to call a press conference.


Why the outcry? Coincidentally or not, the Seattle Times published an investigative series the same weekend the yet-to-be-named calf took her first bites of hay. The series’ thesis: pachyderms in captivity die way too often. And one of those stories was about this particular baby, the offspring of Rose-Tu (mom) and Tusko (dad.) About how that baby might be yanked away from her big gray loving mom at some point and shipped off to do tricks for Have Trunk Will Travel, which animal-rights activists accuse of abusing elephants. Turns out, Have Trunk Will Travel actually owns that little baby elephant, Rumpelstiltskin style. The company also owns Rose-Tu’s fourth offspring, and her sixth. And that means the company has the right to take her away.

The agreement came about because Have Trunk Will Travel owns the baby's father, Tusko, which was loaned to the zoo for its breeding program. The show may never claim her, but activists don't want to take any chances. Read more about the complicated deal at The Daily Beast.
Posted by nacktman at 6:12 PM