A Texas woman with a grudge against her boyfriend’s teenage son planted a gun in the boy’s backpack earlier this month and then sent him to school with it. Heather Hodges, 26, called the school district on November 5 and warned them that the 13-year-old had taken a pistol to Magnolia Junior High, outside Houston.
She identified the boy by name, and security guards at the school later found an unloaded 9-mm handgun in his knapsack. "Her explanation to me was that she wanted to see my son get into trouble," said the boy's father, who asked not to be identified to protect his son. Hodges was arrested after police traced the tip to a convenience store pay phone. 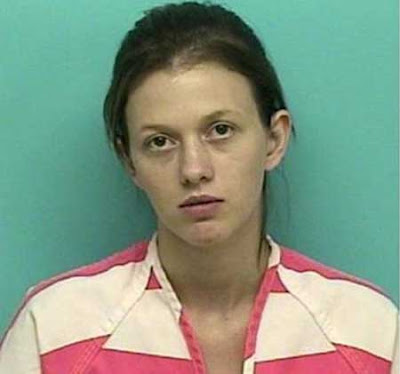 Security cameras there caught her making the call. The boy’s father said Hodges, now his ex-girlfriend, had a rocky relationship with his son. "Their relationship wasn't great and so he automatically was like, 'It was Heather that called,’” he said. "You're facing down the barrel is what you're doing if you're willing to go that far," he said of his former live-in girlfriend.

She is being held on $20,000 bond, charged with unlawfully carrying a weapon on restricted premises and unlawfully transferring a handgun to someone under age 18. The boy was cleared of any wrongdoing. Since the incident last week, the father has moved away from Magnolia to remove his son from the situation.
Posted by nacktman at 4:12 PM