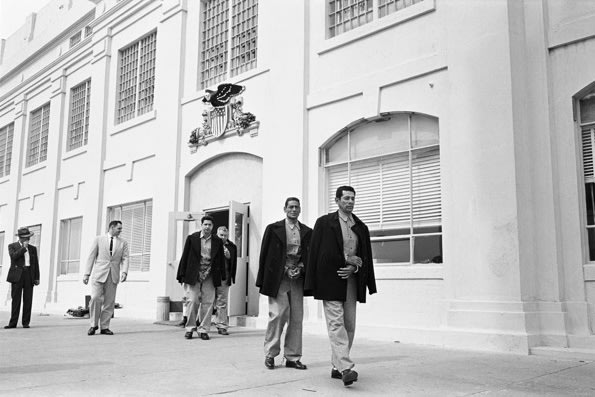 The black-and-white photographs show a line of prisoners — some with heads bowed, others with eyes staring forlornly at the camera — as a guard leads them to a boat for their final trip off The Rock.

The striking images were taken on March 21, 1963, the day the infamous prison on Alcatraz Island in San Francisco Bay was closed after holding the likes of gangsters Al Capone and Mickey Cohen.
Swarms of reporters chronicled the single-file line of departing inmates.

On Thursday, however, the National Park Service unveiled an exhibit of newly discovered photos that depict new details about the final hours of Alcatraz.
The ceremony marking the 50th anniversary of the closing was attended by former guard Jim Albright, who can be seen in the photographs in a light gray suit and dark tie, walking the shackled prisoners past reporters.
He had been a guard during two escapes, including the one made famous in the movie "Escape from Alcatraz," and was keeping an eye open for any funny business involving the prisoners and reporters.
"What I was worried about was that one of these god-darned fools was going to give the inmates something that they could get out of their cuffs with," Albright, now 77, said. "These were all the worst bad guys. If you messed up somewhere else you came to Alcatraz."
Alcatraz started as a fortress and became an Army disciplinary barracks before the Bureau of Prisons took it over in 1934 to house America's most notorious criminals.
U.S. Attorney General Robert Kennedy signed an order in 1962 to close the prison due to its expensive upkeep and its prime location in the bay.
Nine years later, Alcatraz became a national park and one of California's most popular tourist attractions with about 1.5 million visitors a year.

The new exhibit at Alcatraz features photos made by Los Angeles-based freelance photographer Leigh Wiener for Life Magazine.
Wiener's son discovered the negatives in a manila envelope in his father's archive that was titled "Alcatraz Prison's Closing Day March 21, 1963."
"Before I even opened the envelope I recognized the historical significance," Devik Wiener said at the unveiling. He called the parks service shortly after his find, which led to the exhibit and a new book.
The images will be on display for at least the next three months.
The exhibit evoked a swell of emotion for people who lived on the island during its days as a prison.

Jan Peters, 62, was the last child to leave the site of the island prison. His father Arnold Peters had been in charge of relocating the inmates to other federal prisons.
Peters choked up Thursday when he discovered an image of his father in one of the pictures on display.
"I'm realizing that we were a part of American history," Peters said, his eyes welling with tears as he stared at his father.
Peters and former Alcatraz resident John Brunner, whose father was the prison's electrician, said living next door to the country's most dangerous criminals was ideal.
They never saw the inmates and had world-class views, fishing and friends.
"It was fantastic to live here. We never had to lock our front door," Brunner said with a chuckle.