An iPad survives after getting embedded in car bumper

An iPad remained intact and fully functioning despite being lodged in a car's bumper for more than an hour. Georgia woman Alexa Crisa was left stunned on realizing she'd been driving around Roswell and Marietta, near Atlanta, with the gadget sticking out the front of her Nissan. 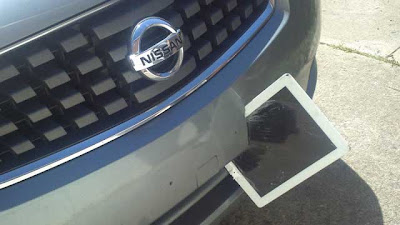 "I went to Target and ran errands with this iPad hanging out of my bumper. I had no clue," the 23-year-old said. "I'm not even sure how I missed it, other than I don't check my bumper for random dislodged electronics," she added. Crisa said she was driving at 40 mph when the device, accidentally left on top of another car that was turning out, flew into her vehicle.

She hit the brakes but, feeling she hadn't run over anything, carried on with her day before going back home. Her dad Nick spotted the gadget when he returned, and set about knocking it out with a hammer. Incredibly, although the screen was smashed, it still worked and they were able to trace the owner so it could be returned.

"It was so remarkable that it was thrown from the roof of the car at 40 mph and still looked like that," Crisa added. "It looked like nothing had happened to the back of the iPad." The owner was able to get a new tablet through his Apple warranty plan, and offered to pay for a new bumper.
Posted by nacktman at 7:11 AM