Naquasia LeGrand, who gets paid $7.70 an hour at a KFC in Brooklyn, N.Y., recently got her full-time hours cut by more than a third. She said the reduced pay isn't enough to pay her bills.


Le Grand is joining fast food workers across New York City on Thursday in protest. Organizers are expecting workers at 70 of the city's McDonald's, Wendy's, Burger King and Yum Brands-owned Pizza Hut and KFC locations to join. The protests are being organized by a coalition of labor, community and clergy groups called Fast Food Forward.
Dozens of workers walked off work Thursday morning at a McDonald's location near Times Square, according to Jonathan Westin, executive director of New York Communities for Change, one of the main sponsors of the protest. He said that a Burger King on Flatbush Ave. in Brooklyn had trouble opening on time in the morning because so many of its workers had walked off.
Burger King, McDonald's and Wendy's did not immediately respond to requests for comment.
The group is asking employers to pay workers a minimum of $15 an hour, and for the right to organize without retaliation and intimidation. Currently, the median pay for the nearly 50,000 fast food workers in New York City is $9 an hour, or $18,500 a year, according to the New York Labor Department. That's about $4,500 lower than Census Bureau's poverty income threshold level of $23,000 for a family of four.
LeGrand, 21, said she lives with her grandmother, aunt and cousin because she can't afford her own place.
"I have to decide whether to get a MetroCard or eat," she said.
This is not the first time LeGrand is joining a protest.
In November, she joined 50 fast food workers in Manhattan, who walked off their shifts calling for similar rights.
Shortly after, Le Grand got a 20 cent raise, but her hours were cut to 24 from 38 per week. Within five months, she was working only 11.5 hours.
"My manager said she was hiring new workers and that's why my hours were cut," she said. She believes it had to do with her participating in the November protests.
KFC didn't respond to a request for comment on LeGrand's allegation. KFC spokesman Rick Maynard said: "Our restaurants in the area are franchise-owned."
Under the National Labor Relations Act, workers are protected from retaliation as long as they work in concert with at least one other employee to try to change their working conditions. However, they can be permanently replaced if they strike for purely economic reasons.
The protest organizer Westin said that more workers were participating Thursday, because the November protests raised awareness of their labor rights.
"The protestors in November showed that workers were able to look their managers in their faces and say they deserve better," he said. "Other workers were emboldened and the numbers are continuing to grow."
The walk outs were scheduled to coincide with the 45th anniversary of the assassination of Rev. Martin Luther King Jr., who was shot in Memphis on April 4, one day after he delivered his famous "I've been to the mountaintop" speech in support of striking sanitation workers.
"To think that in 2013 we're having the same discussion about gaining a respectable wage and the right to organize as we had in 1968 is ludicrous," said Minister Kirsten John Foy, a civil rights activist at the National Action Network in Brooklyn who is participating in the protests.
Labor experts say there have been scattered attempts to organize over the last several decades, but very little in the fast food industry has stuck. Many say that's because there is a high turnover rate of labor in the industry. 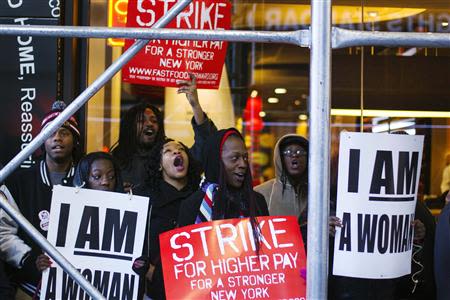