President Obama’s is using his own tax return to demonstrate what is wrong with the system. The president is also calling for taxes to be raised on the wealthy.
The White House used the release of the President and First Lady’s tax returns to call for higher taxes on the wealthy, 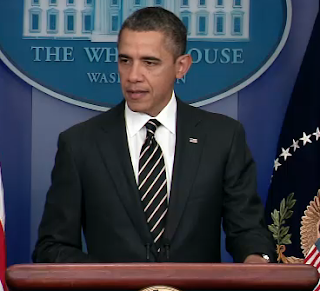 Today, the President released his 2012 federal income tax returns. He and the First Lady filed their income tax returns jointly and reported adjusted gross income of $608,611. The Obamas paid $112,214 in total tax.
The President and First Lady also reported donating $150,034 – or about 24.6 percent of their adjusted gross income – to 33 different charities. The largest reported gift to charity was $103,871 to the Fisher House Foundation.
The President’s effective federal income tax rate is 18.4 percent. The President believes we must reform our tax system which is why he has proposed policies like the Buffett Rule that would ask the wealthiest Americans to pay their fair share while protecting families making under $250,000 from seeing their taxes go up. Under the President’s own tax proposals, including limitations on the value of tax preferences for high-income households, he would pay more in taxes while ensuring we cut taxes for the middle class and those trying to get in it.

The president’s own tax return demonstrates that the wealthy could and should be contributing more. The federal tax system is tilted so heavily towards the wealthy that President and First Lady Obama only paid a 7% higher rate than most middle class families. To his credit, the president isn’t another millionaire in the White House trying to pretend like he is a regular guy by posing for photo-ops of himself cutting brush.
President Obama has been a warrior for tax fairness. He is so committed to the cause that he is willing to hold himself up as an example of what is wrong with the system. The president’s honesty and commitment to a more equitable tax system should be beyond question.
The Obama White House has done something historic. They have taken the populism of the tax issue away from the repugican cabal. The president owns the tax issue now, and his ability to shift the national discussion on taxes remains an important part of his presidency.
Posted by nacktman at 11:21 AM