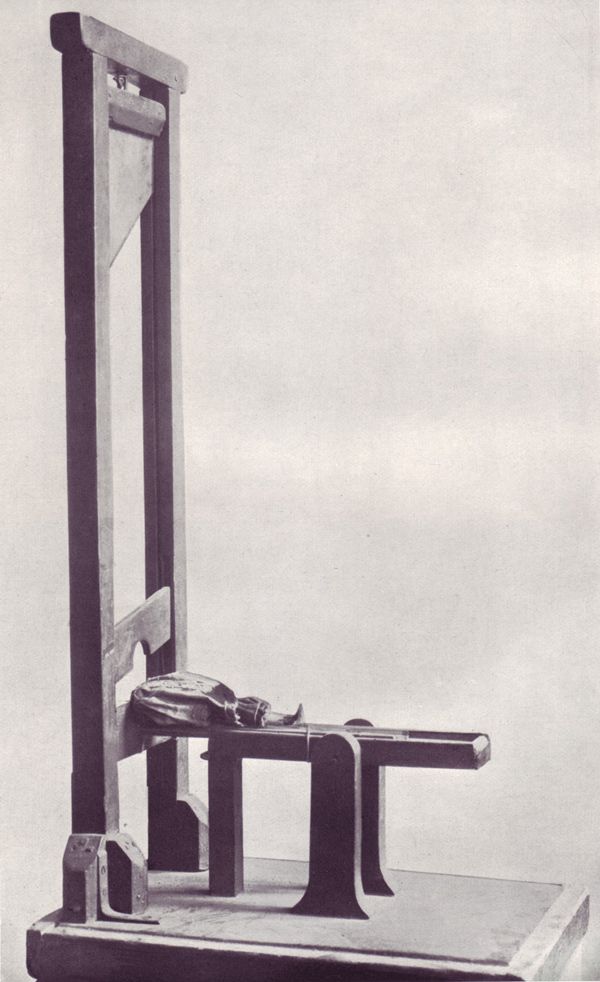 A toy guillotine could be morbidly funny in modern times, but this toy dates back to 1794, during the Reign of Terror phase of the French Revolution. 50 Watts quotes Karl Grober's book Children's Toys of Bygone Days: A History of Playthings of All Peoples from Prehistoric Times to the XIXth Century:


The worst monstrosity of the kind was the outcome of the French Revolution, which indeed was over-rich in aberrations of taste. The toy shops put on the market little guillotines with which little patriots could behead figures of aristocrats. There still survive some specimens of this pretty and diverting machine, of which one bears the date 1794 [above]. These were not models but pure toys; and in proof of this we have king's evidence from one whom we should never suspect of wishing to give so bloodthirsty a toy to his little son. This was no other than Goethe. In December, 1793, he asks his mother in Frankfurt to get him such a toy guillotine for his son August; and in her reply he certainly got some home-truths. In her decisive manner she wrote to him by return post: 'Dear Son, Anything I can do to please you is gladly done and gives me joy;--but to buy such an infamous implement of murder--that I will not do at any price. If I had authority, the maker should be put in the stocks and I would have the machine publicly burnt by the common executioner. What! Let the young play with anything so horrible,--place in their hands for their diversion murder and blood-shedding? No, that will never do!"