Man run down in dispute over duck

A pensioner in Australia's Northern Territory with a "vendetta" against a former tenant posted wanted signs all over rural Darwin seeking information about a stolen duck before his obsession turned violent. Geoffrey Allan Thomson, 50, will be sentenced in the NT Supreme Court later this month after being found guilty of recklessly driving a car at his rival, Daniel Eaton, at a Bees Creek property in January last year.
The court was told: "Thomson had a vendetta against Daniel Eaton that extended to starting a poster campaign in the rural area. "It was an obsession of his to bring Mr Eaton to justice for a grievance he had in his mind about the loss of a bike and a duck." Prosecutor Steven Ledek told the jury that Thomson "linked" the two thefts to Mr Eaton, 28, because he believed his short-term tenant had done wrong by him. 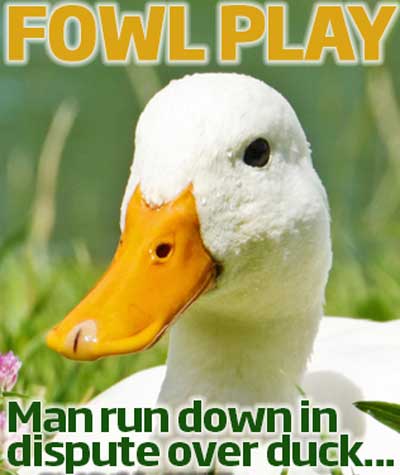 The alleged thefts happened six months after Mr Eaton had moved off Thomson's property. But Mr Ledek said the pensioner started putting wanted signs all over the tight-knit community seeking details of Mr Eaton's location. The court was told the signs read: "Wanted Daniel Eaton, son of Robin and Bernadette Eaton of Eaton Builders. $100 reward for information in relation to a stolen motorbike and duck." The Crime Stoppers number was posted at the bottom of the poster.

Mr Ledek said Thomson found Mr Eaton at his parent's home before driving straight at him as he ran down the driveway, clipping him in the leg. But Thomson denied the allegations. Thomson also told the court he had two rules at his property - no police and no noise. He claimed Mr Eaton had broken both and had left his demountable damaged when he vacated after only living there three months.
Posted by nacktman at 10:32 AM