Police have condemned the public for not reporting "blatant" cycle thefts in Cambridge, a city where one in three journeys is by bike. The thefts were captured on CCTV in busy locations in the city centre. Plain-clothed officers ripped chains from the bikes and sliced through locks close to "large numbers" of witnesses, but no one reported the "crimes". 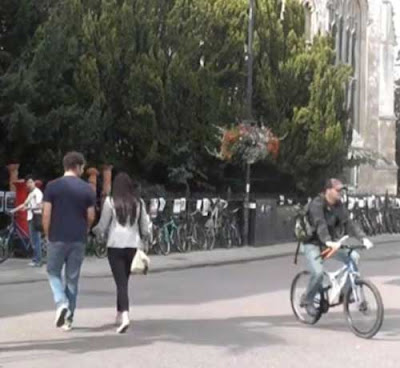 The thefts were set up as part of the city’s Operation Huntsman which is using crime prevention advice alongside increased patrols to crackdown on robbery, burglary and theft. In the space of a few hours, the ‘crooks’ ripped chains from bicycles and even grappled with bolt croppers to cut through bike locks.

But despite being in full view of a host of potential witnesses, no-one reported the crimes. Officers are urging people to help police tackle cycle crime by reporting thefts when they happen. Sergeant Andrea Gilbert said: “The CCTV is shocking because the thefts are blatant yet, despite a large number of people witnessing the crime, we didn’t receive a single call.

YouTube link.
“Sadly people are too reliant on others to report crime, but we need everyone to play their part. If you don’t call police it means those thieves are potentially free to strike again – and next time you could be the victim. We are committed to tackling bicycle crime, which is an ongoing issue in the city, but we need the public’s help.”
Posted by nacktman at 12:47 AM