Woman found drunk man asleep on top of her horse

A woman in Germany made a startling discovery as she went to prepare for a morning ride – there was someone already on her horse and he was passed out drunk on top of it having spent the night there.


The 26-year-old unnamed man had been making his way home worse for wear from a party in Bavaria, on Saturday night. Overcome with tiredness en route, he spotted a cozy stable and decided to stop off for the night. 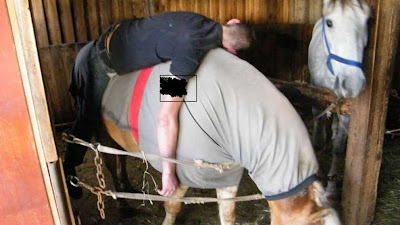 Freezing cold, he crept into the shack and eyed up a very warm-looking horse. Perhaps out of fear of being trampled on, he dismissed sleeping next to the horse, and instead climbed on its back and nodded off.

It was not until 8.15am, when the animal's owner arrived at the stable in Landsberg to find the man slumped out across her horse, that he woke up. She rang the police, who came and took the man home.
Posted by nacktman at 12:50 AM