If Hobby Lobby Wins, It Will Be Even Worse For Birth Control Access Than You Think 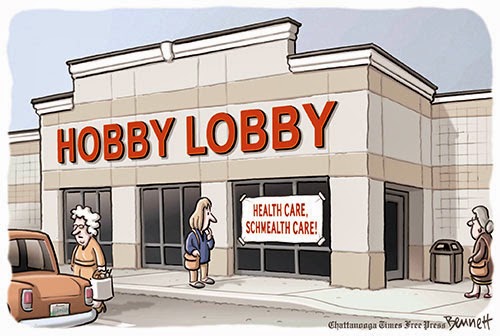 Next week, the Supreme Court will take up the issue of contraceptive coverage, hearing arguments in a closely-watched lawsuit against the Affordable Care Act. Two for-profit companies - the craft chain Hobby Lobby and the furniture-making company Conestoga Wood Specialties - are fighting for their right to withhold insurance coverage for certain types of contraceptive methods based on their religious beliefs. But there's actually much more at stake than prescription drug coverage.
.
The two plaintiffs in these cases object not just to covering specific types of birth control, but also to providing counseling about that birth control. In Hobby Lobby's lawsuit, for instance, the company states that it does not want to follow the Obamacare provision that forces employers to "provide health insurance coverage for abortion-inducing drugs and devices, as well as related education and counseling."
.
The media coverage surrounding the upcoming challenges has mainly focused on the first part of that argument, as reproductive rights advocates point out that women need access to affordable contraceptive methods regardless of their boss' personal beliefs about birth control. However, the second part threatens to have incredibly far-reaching ramifications for women and doctors in this country, too. Essentially, if Hobby Lobby and Conestoga Wood are successful, they'll win the right to refuse to extend coverage for doctor's visits that include discussion about certain forms of contraception, like IUDs or the morning after pill.
.
"It's frankly a rather radical idea - the idea that someone can say that if your visit to your doctor is going to receive payment from your insurance company, then your doctor can't talk to you about certain subjects," Adam Sonfield, a senior public policy associate at the Guttmacher Institute, explained in an interview with ThinkProgress. "Counseling and education about contraception has been a basic part of a medical visit forever, even before the methods themselves were covered. Before we had prescription drug coverage, we certainly had coverage for the visit to your doctor, and there were never any limitations about what you could talk to your doctor about."
[...]
"It's an incredible devaluing of the insurance that you as an employee work for," Sonfield, who recently published a policy review of the central arguments in the upcoming Supreme Court challenges, pointed out. "This is telling you that you can't use your compensation - your own benefits that you have earned - in a way that your boss objects to. And that is a frightening road for us to be going down, as a society."
[...]
And birth control isn't the only type of medical care that some Americans object to on religious grounds. There are some groups who are opposed to modern health services like vaccinations, blood transfusions, or mental health care. If these upcoming legal challenges are successful, that could open the door for employers to restrict their workers' coverage for doctors' visits that include discussion of those topics, too. It's a slippery slope.
[...]

Worker Rights vs. religious bigotry heads to the Supreme Court
Posted by nacktman at 12:06 AM