Man accused of stabbing wife for wearing his socks

A man from Clarksville, Tennessee, was arrested on Friday after allegedly attacking his wife with a "survival style" knife because she was wearing his socks.

The wife told police that Sean Terrance Jones had been drinking, and she was going to leave their apartment when he grabbed her by the neck and told her to give back his socks, according to an arrest warrant. 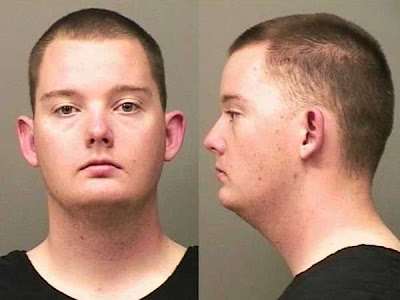 She said she removed the socks and went to get into a friend’s car, but Jones followed her with a “large survival style knife” and began beating on the windshield. She said she opened the door to try to get him to stop, and he threatened her, then stabbed her in the right side of her neck, behind her ear.
A police officer saw a small puncture wound on her neck. The victim said the knife was large, but the tip seemed to be dull. The warrant did not indicate whether she was treated for the injury. Jones, 20, was charged with aggravated assault. He was booked into Montgomery County Jail on $5,000 bond.
Posted by nacktman at 12:04 AM