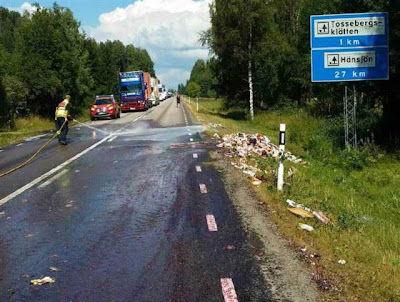 Drivers in western Sweden were stuck in a jam after a van shed its load of preserves and juices which led to major traffic problems. The sticky situation occurred on the E45 outside Sunne at around midday on Tuesday. A police spokesperson said the delivery van had got into difficulty and started to shed all manner of different items.
"There was a lot of jam and juices which went down the drain," Tommy Lindh, spokesperson for the Värmland police said. The drama unfolded when the door of the delivery van opened and a pallet, loaded with breakfast favourites, was thrown out onto the road. 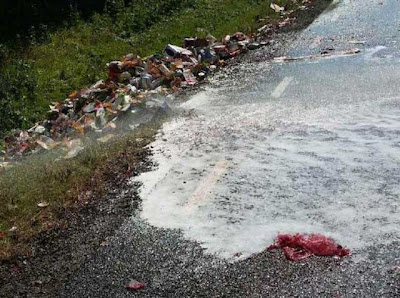 Predictably, it led to a traffic jam with a section of the road being sealed off so a clean-up operation of broken glass and sticky substances could be attended to. Emergency services were dispatched and firefighters ensured that the traffic backlog could be unstuck.
Firefighter Fredrik Persson, from Sunne emergency services said: "It's a mixed compote, common pancake jam. We have a stretch of 70 - 100 metres that is just full of jam." Nobody was hurt in the incident with drivers urged to take an alternative route while the clean-up continued. Traffic got back underway at 2pm
Posted by nacktman at 12:05 AM