Archaeologists have long speculated about who might be buried in the Amphipolis tomb. 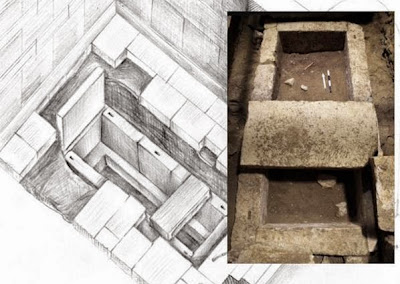 The ancient burial site, found in Greece's Serres region, dates to 325-300 B.C.E., and scientists believe it was built after the death of Alexander the Great. The tomb is the largest ever discovered in Greece, and archaeologists have been eager to determine who was buried inside it.
The tomb included three funeral chambers, but archaeologists recently discovered a secret fourth chamber that was apparently an "underground vault" beneath the third chamber. Now, the team is a lot closer to finding out just who the tomb belonged to — they just found a skeleton in the secret chamber, after months of excavations.
Ancient Origins says the discovery is "the moment that archaeologists and history buffs around the world have been waiting for."
Experts believe the tomb was home to a Macedonian royal, possibly Olympias, the mother of Alexander the Great.
Posted by nacktman at 12:04 AM