The Great Sausage Duel of 1865 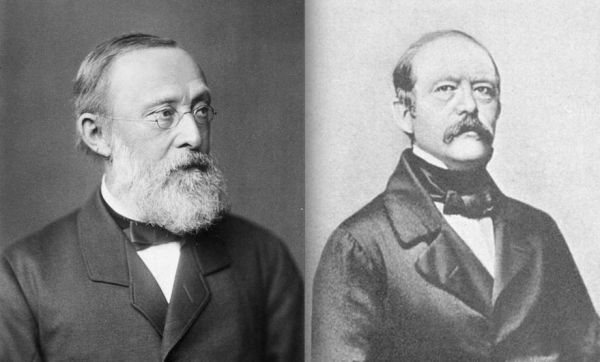 Professor Virchow (left) and Otto von Bismarck.
In 1860s Prussia, Minister President Otto von Bismarck and Progressive Party leader Rudolf Virchow (who was also a scientist) were political rivals in the Prussian legislature. A particularly nasty argument over funding for the navy in 1865 left von Bismarck feeling humiliated by Virchow.


At the end of a particularly severe attack, Bismarck felt himself personally affronted, and sent seconds to Virchow with a challenge to fight a duel.The man of science was found in his laboratory, hard at work at experiments which had for their object the discovery of a means of destroying trichinæ, which were making great ravages in Germany. “Oh,” said the doctor, “a challenge from Prince Bismarck, eh? Well, well, as I am the challenged party, I suppose I have the choice of weapons. Here they are!” He held up two large sausages, which seemed to be exactly alike. ” One of these sausages,” he said, ” is filled with trichinae—it is deadly. The other is perfectly wholesome. Externally they cannot be told apart. Let His Excellency do me the honor to choose whichever of these he wishes and eat it, and I will eat the other.” Though the proposition was as reasonable as any dueling proposition could be, Prince B.’s representatives refused it. No duel was fought, and no one accused Virchow of cowardice.

It seems like a clever response by Virchow, and we don’t know what would have happened if von Bismarck had called his bluff. In fact, the story seems altogether too good to be true. Skulls in the Stars tracks down the documentation of the incident, and along the way gives us the scary lowdown on the Trichinella spiralis parasite that terrified the people of Europe.
Posted by nacktman at 12:04 AM