The Hidden History of Prosperity

In the crisis of World War II, the nation made the political choices that created the robust egalitarian economy of the next 30 years. Can we respond to the climate crisis with similar policies to rebuild the middle class?
by Robert Kuttner 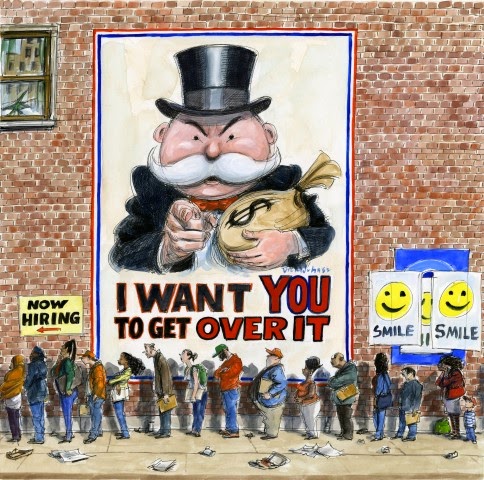 For most Americans, the central economic fact of the past four decades is the stagnation and decline of earnings. Yet this shift is not the central political fact. Why hasn’t the system’s brutal turn against the working and middle class risen to a first-tier public issue?
The raw material is surely there. Americans are far from satisfied with the deal they are getting. Polls show that large majorities believe that the top 1 percent takes too much, that the income distribution is too unequal, that their children are likely to be worse off than they are, that job security is precarious, and that the middle class is at risk.
Two big factors prevent these issues from assuming center stage. First, the public is increasingly skeptical that government can do much to change things for the better. The sense of resignation and cynicism plays to the ideology of repugicans—the claim that government doesn’t have a big part to play in the economy and that we’re all on our own. Conversely, resignation harms Democrats, whose core ideology is that government exists to help ordinary people. The repugicans have done their best to prevent Democrats from delivering on the vision of activist government.
Second, persistent divisions of race as well as a nativist backlash against immigrants undermine a common politics of uplift for working Americans generally. The New Deal/Great Society formula of tax, spend, benefit, and elect has been sundered by stagnation of working-class earnings and fears that government aid would only go to “them”—the undeserving poor. That fear explains much of the opposition to the Affordable Care Act. It sheds light on why victims of the subprime bust were not the objects of broad public sympathy. Racial division has been the standard repugican playbook since Nixon’s Southern Strategy, intensified by Ronald Reagan and redoubled by the teabaggers. The more that working families are economically stressed, the less help that government delivers, and the more the tax burden tilts away from the top, the more 'credibility' the lunatic fringe wingnuts have.
In recent years, with repugicans intensifying their strategy of total blockade, the Obama administration’s economic policies have been reduced mostly to a politics of gesture. Increases in the minimum wage, modest educational reforms, orders for the Labor Department to crack down on overtime abuses, tweaks to the tax structure—such policies will help around the edges but not transform the structure of an economy that delivers increasing inequality and insecurity. The Affordable Care Act, a legislative success that was more than a gesture, was so bungled in its execution that, on balance, it raised more doubts about the place of affirmative government and its steward, the Democrats. The 2009 stimulus was a limited success, but it was too small to alter the deeper dynamics of the economy.
The obstacles to reclaiming a fairer society have little to do with immutable characteristics of the new, global, digital economy. They are mainly political.
How to break out of this vicious circle? How to make the economic plight of working families the core concern that it ought to be? How to restore constructive government to a leading role in that project? The obstacles to reclaiming a fairer society have little to do with immutable characteristics of the new, global, digital economy. They are mainly political.