In Japan, Capybaras Get Treated to Yearly Hot Tubs 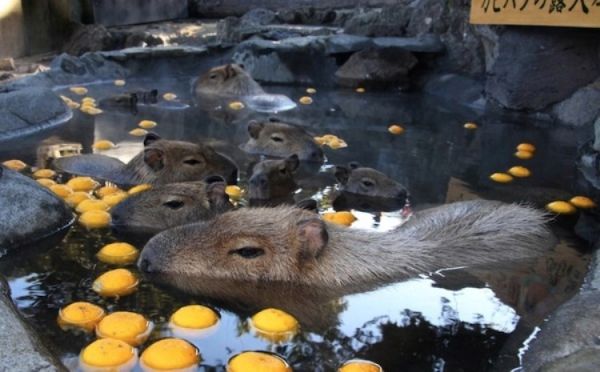 In Japan, an "onsen" is a hot spring; the term is also used to describe the resorts that are built around hot springs. Who would have thought that onsens and capybaras would collide? According to one source, the two ideas were linked when over thirty years ago, a Japanese zookeeper noticed that the rodents were gathered around a puddle of hot water in an effort to warm themselves during the cold winter. The scene evolved and became an attraction.
Izu Shaboten Park has been indulging their capybaras in hot baths for thirty-two years. The bath is complete with citrus to make it a more pleasant sensory experience. At least twenty other Japanese zoos have capybara onsens as well. These events are always held in the winter to keep the animals warm. There's even a Japanese hashtag #カピバラ露天風呂 that, translated, means “capybara outdoor bath.” (If you like capybaras, check out the hashtag link. It's full of wonderful photos!)
They have hot tubs, they have hashtags, Twitter users are creating likenesses of them in bowls of soup — these Japanese capybaras are riding high!
Posted by nacktman at 12:03 AM