A barber who bit a rival in a violent attack following a row over a comb has been jailed for 18 weeks. Gary Hatto, 48, sank his teeth into the thumb of former employee Mike Harford after attacking him on his own doorstep, leaving his face covered in blood. And Hatto, who has a chain of eight shops bearing his name, also rained punches on his victim in the terrifying Sunday morning attack. Hatto, of South Wraxall, Wiltshire, pleaded not guilty to common assault but was convicted by magistrates following a trial last month. He said he had not started the fight and had only gone to the house in Devizes, to apologize. The men had been friends in the past with Harford doing his apprenticeship with his attacker but they fell out 11 years later when he branched out on his own. 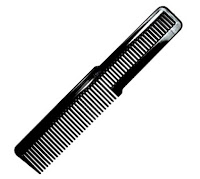 The justices heard how the incident started on Saturday, June 21, last year when one of Hatto's staff had gone to Mr Harford's shop to borrow a specialist flat-top comb. Mr Harford was not at work that day as he was at home looking after his three children while his wife was away and his employee refused to loan the tool. Later that day, when Hatto got wind of the snub, he bombarded his victim with text messages before turning up on his doorstep at 9.30am the following day. Nick Barr, prosecuting, told the court: "Mr Harford asked him to leave as he had his three young children inside. But Mr Hatto became angry and, five or six times, punched him to the head.
"Mr Harford got him a headlock to try and stop the punches and they fell to the ground. Hatto then bit him on the thumb causing excruciating pain." The two men were locked together on the ground in the front garden until Hatto's employee Yvonne Tallis, who had been sitting outside in a van, tried to split them up. After Hatto had gone, Mr Harford was taken to Chippenham hospital and was treated for injuries to his face and thumb. Miss Tallis, who gave evidence in defense of her boss, said they were traveling to Hatto's Marlborough shop and he decided to stop so he could apologize for the texts. She said Hatto stepped back a couple of meters after knocking on the door and it was Mr Harford who launched himself at Hatto and tried to strangle him before they fell to the ground.

However the magistrates said they believed Mr Harford's version of events and found Hatto, who has four previous convictions for violence and was jailed for 12 weeks in 2010, guilty. In 2007 a judge branded him 'arrogant' when he partially upheld his appeal against a community order for a violent attack. In that incident, again at about 9am, he laid into a dog walker in a local park pushing a woman and then punching her husband. He was under the misapprehension his then fiancée was being attacked when in reality she was crouching down trying to put one of his bulldogs back on its lead. Mr Harford said: "I’m glad justice has been served and it’s all over. I don’t want to rake it up again by saying any more than that.”
Posted by nacktman at 12:06 AM