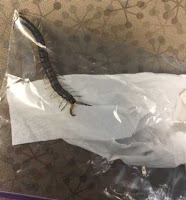 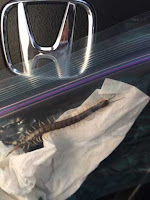 A teenager from Bryant, Arkansas, is recovering after pulling a centipede from his ear. Grant Botti, 14, was asleep when pain in his ear woke him up.

After feeling around to see what was causing the pain, the boy pulled out a 4-inch centipede. His mother Angela Botti says she retrieved the bug and put it in a bag.
She then took her son to the hospital, and the bug in the bag went along too. Doctors at Saline Memorial examined Grant and said the centipede had caused abrasions to his eardrum and ear canal, which they covered with a bandage. 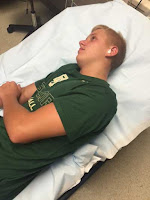 Grant's mother says she's not sure where the bug came from but noted that the family had just came back from the beach. Hospital staff told the family they've pulled many things from ears before but never a centipede.
Posted by nacktman at 12:04 AM