Buildings wrapped in tin foil to protect them from wildfires

Officials with the National Forest Service in Idaho are protecting lookouts and cabins across the Nez Perce-Clearwater Forest from wildfire activity in a rather unusual way.
Officials said they have been wrapped the structures in tin foil to protect them. Forest Service officials estimated that a roll of the multiple-ply foil costs $398. 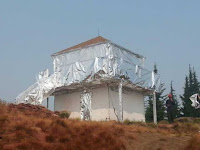 They also used duct tape to seal the foil and a line of rocks at the bottom to hold the foil down. Forest Service crews began using the foil in the late 1980s to protect historic cabins and lookout towers that cannot be replaced.
They called the success rate of Shelterwrap "tremendous" in Idaho. One of the buildings being wrapped in foil is the Scurvy Mountain Lookout on the North Fork District.
Posted by nacktman at 12:06 AM