The Vancouver Police Department posted a photo on Facebook showing police service dog Niko in a harness while clinging to his human partner's leg while the pair abseiled down the side of a building.

Const. Sandra Glendinning, spokeswoman for Vancouver police, said the image was snapped while the five-year-old German Shepherd was attempting his first abseil from a five-story building, his highest elevation yet, with his handler.“When they came over the ledge and they started going down, he was fine for the first little bit,” she said. “Then Const. Dan Ames, who is the handler in the picture, said he could feel the dog wrapping his front legs around his leg about two thirds of the way up, and the dog just kind of hung on.”
Although Niko appears frightened while he clings to his partner, Glendinning said the dog actually took to abseiling very quickly. By wrapping his legs around his handler, she said the dog was able to stabilize himself. Once they both reached the ground, she said the pair played a game of tug of war. It wasn’t long before the pooch, who has served as a police dog for three years, wanted to abseil down the building again, she said. “It’s all positive reinforcement,” she said. 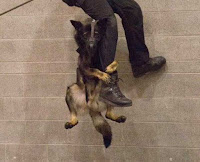 “When they do something that we want them to do, we praise them and play tug of war or fetch … so that they know that they’re doing something that they’re supposed to.” She said it’s important for police service dogs to learn how to abseil, as they need to be prepared for any situation that could arise, including abseiling out of a helicopter. “We originally start training the dog just wearing the harness,” she said. “Then it’s a really slow introduction to the abseil. It starts a few feet off the ground and they gradually work up higher from there.”
Posted by nacktman at 12:08 AM