A man known as “The Gooseman” has been arrested in connection with a July fire at his home in Modale, Iowa. Paul Messerschmidt, 58, has been arrested on suspicion of insurance fraud for allegedly giving a false report about items lost in the fire, according to the Iowa Fire Marshal’s Office. Messerschmidt travels the state and country with a flock of geese dressed in a variety of outfits for parades and county and state fairs. He also takes along his pet skunk. 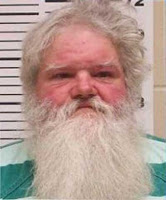 While he was at a fair in Malvern on July 11, his home burned to the ground in what the fire marshal’s office has called a suspicious fire. No animals were injured in the fire. John Ticer of the Fire Marshal’s office said an investigation revealed items Messerschmidt reported lost in the fire were not destroyed. Ticer said he was unable to say what those items were. In July, Messerschmidt said he lost half of his roughly 20 outfits for his geese and his sewing machine. 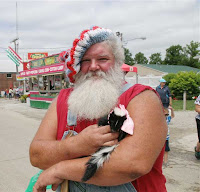 Messerschmidt also allegedly “provided false information to the insurance company and criminal investigators in the case,” Ticer said. The Harrison County Sheriff’s Office arrested Messerschmidt on Monday. He posted a $1,500 bond. An investigation into what caused the fire continues. Ticer called the circumstances suspicious. “At this time, we don’t have a specific cause or a specific suspect for who set the fire, if it was set,” he said. In August, Ticer noted two reasons why the fire is suspicious.

It was the third fire on the property. In 2013, an outbuilding burned down, and in 2014, a machine shed burned down. Messerschmidt’s home had been foreclosed upon. A day before the fire, on July 10, a bank had closed on a purchase of the house. The house sold at a sheriff’s sale, Ticer said. Messerschmidt was still living at the house at the time despite the sale. In July, Messerschmidt said he bought the house about 10 years ago and spent the first year working with his daughter and son-in-law to renovate it. He said then he was staying with his daughter and her family.
Posted by nacktman at 12:04 AM