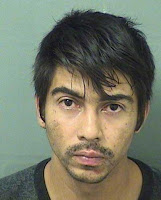 A Florida man tried to break into a house, deputies said, and when his attempt was thwarted by a burglar alarm, he stole the motion detector.

Carlos Abudeye Guerra, 27, was arrested on Thursday, according to the Palm Beach County Sheriff's Office. Deputies said they got a call from a man in West Boca just after 5am.
The man told deputies his home alarm had gone off and he saw a light coming from underneath the door. He barricaded himself in his room and called deputies, he said.
Shortly after, deputies arrived on scene and found Guerra in the backyard trying to throw the motion detector into a wall. He has been charged with burglary, criminal mischief and grand theft. He is being held at the Palm Beach County Jail in lieu of $23,000 bail.
Posted by nacktman at 12:08 AM