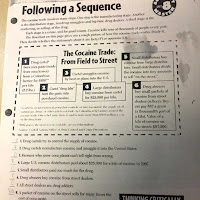 A teacher in Texas sent home an assignment titled “The Cocaine Trade: From Field to Street” with an 11-year-old boy, and his parents are upset. Keller Independent School District is now reviewing the sixth-grade assignment that had students make a step-by-step plan showing how cocaine gets from a drug cartel to a street dealer.

“I walked by and noticed that in big bold letters across the front of his assignment it said… COCAINE,” said Scott Pick. Pick says his son missed a few days of school at Bear Creek Intermediate in Keller after getting strep throat. Pick says he was going over his son’s make-up work for Science Class and came across the assignment in a section for “Following a Sequence”.
“I felt like they were giving my kid a diagram of how to become a drug dealer,” Pick said. The assignment lists the steps of the drug trade from Cartel to street dealer. “I was shocked by it. It startled me. It took me aback for a second… I grabbed the paper immediately.” Keller ISD say they now plan to investigate and have issued a statement.

YouTube link.
“Keller ISD takes the issue of drug abuse very seriously, and as such, allocates multiple resources to combat abuse through drug education and intervention. The study sheet in question will be reviewed before being considered for future use. The district will continue its concerted efforts to review, remind, and revise drug educational material on a regular basis.” Pick didn’t let his son turn in the assignment, and says it has already spurred some uncomfortable questions.
Posted by nacktman at 12:09 AM