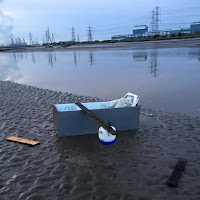 A river search was launched after people were spotted floating inside a fridge. Flint Coastguard Rescue Team received the strange report at 7.34pm on Tueday and launched a search mission.
A member of the public reported that people were inside a fridge on the River Dee near Connah's Quay in Flintshire, Wales. However when the coastguard team arrived the fridge was found empty.
The fridge was then removed and taken to a safe area. Flint Coastguard Rescue Team posted on Facebook: "Team paged by Holyhead CGOC to reports of persons floating down the River Dee in a fridge in the Connah’s Quay area.

"Once CRT on scene persons had left the area leaving behind the fridge on the rivers edge. CRT removed fridge to a safe area making sure it won’t float again. Many thanks to the first informant and members of the public for helping us with our inquiries. Team stood down and returned to station."
Posted by nacktman at 12:12 AM