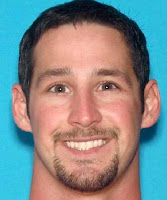 A 26-year-old man from Nampa, Idaho, is accused of pleasuring himself while parked in a truck and broadcasting the acts over the internet in the nude.

Earlier this month, Boise Police received an anonymous tip about lewd conduct occurring at the Boise Town Square Mall. Officers investigated the call, and were able to identify the suspect and determine that he would be back in the area.
Police tracked down the suspect in a Nampa parking lot and say he was "completely nude, involved in sexually explicit acts with himself" and was "broadcasting live over the internet." Police arrested the man, identified as Daniel J. Mena, and charged him with disorderly conduct.
"The idea that these types of acts were going on in a public place, open to the view of any passer-by's is something we take very seriously. The possibility that our residents, including children, might have been exposed to this lewd behavior is disturbing," said Sergeant Tim Riha of Nampa Police Department. Mena is being held in the Canyon County Jail.
Posted by nacktman at 5:36 AM