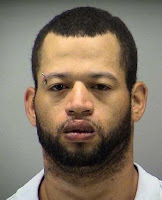 A man is behind bars following an argument about cheese sticks. According to police reports, Melvin Bernard Folks, Jr., 25, was upset because he thought another man had eaten his cheese sticks. Police were called to an address in Dayton, Ohio, at around 4:50am on Thursday for an assault. The alleged victim, a 56-year-old man, told police he has permission to stay in the garage of a home on the street.
Between 3am and 4am, the victim said he was approached by Folks who accused him of eating his cheese sticks. The man denied eating the cheese sticks. After a verbal argument, the victim said he was struck multiple times in the head.
A witness known as "Raspberry" confirmed to police that the man and Folks were arguing about cheese sticks. He said that Folks hit the victim during the argument. Police say the man did have a swollen left eye and dried blood on the side of his head. Folks is now in custody at the Montgomery County Jail on a single count of assault.
Posted by nacktman at 7:34 AM