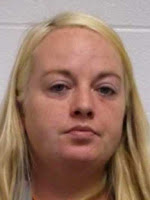 Authorities allege a woman entered a resident’s garage in Winchester, Indiana, and stole garlic bread and a beef heart from a freezer.

City police said when they arrived at the crime scene late on Sunday, they found Danielle L. Cox, 30, of Union City, Ohio, outside the back door of her alleged victim, having consumed a portion of the garlic bread she was accused of stealing.
“She had apparently been eating the garlic bread and was attempting to get into the house when the officer arrived,” according to an affidavit. “The officer observed a frozen beef heart on the ground beside Cox.” The homeowner identified the frozen food as having been in her freezer, and said she did not know Cox.
Cox, meanwhile, told an officer “she knew that she was in Winchester, but believed that she was outside a bar, only a block from the hotel” she said she was staying in. An officer said that Fox became “belligerent” when she realized she was being arrested, and “cried and yelled” while being driven to the Randolph County jail. Prosecutor David Daly’s office on Tuesday charged her with burglary and theft. An initial hearing is set for Thursday in Randolph Circuit Court.
Posted by nacktman at 4:40 AM