The FBI is offering up to $1,000 for information that can lead to a bank robber, nicknamed the "Spelling Bee Bandit" for his misspelling of the word "robbery" on hold up notes. 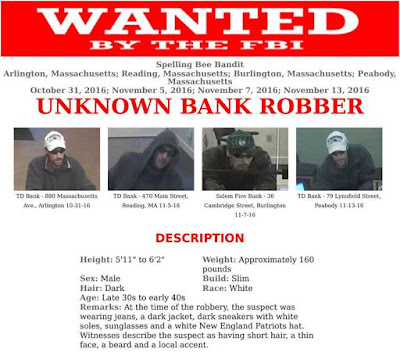 The man is wanted for multiple heists in the Greater Boston area. Investigators believe the suspect robbed four different banks in Massachusetts, including Arlington, Reading and Burlington, over a two-week period.
The latest robbery occurred at a TD Bank Peabody, Massachusetts. In every case, he put on sunglasses and handed a demand note to the teller with "Robery" written on it, according to the FBI.