Why do Dwarves Sound Scottish and Elves Sound Like Royalty? 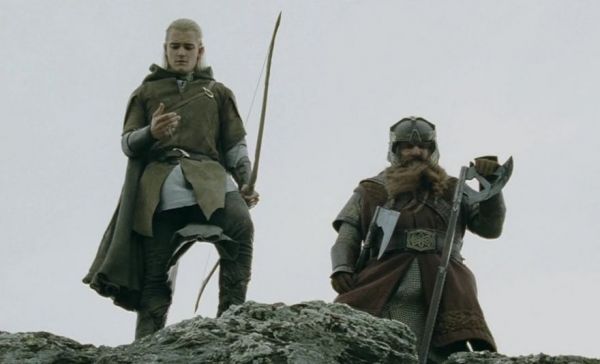 When parents tell stories to their children, we get an image of fantasy creatures that's all our own.  Later we become more attuned to the pop culture depictions of them, like the elves from Rudolph the Red-Nosed Reindeer and the dwarves (or dwarfs) from Snow White and the Seven Dwarfs. But in 2016, mentions of these characters are most likely to make us think of Lord of the Rings. The movie version, where hobbits, orcs, elves, dwarves, and men all have their distinctive accents.

Throughout The Hobbit, the Lord of the Rings trilogy, and the reams of related histories Tolkien wrote about Middle Earth, he established whole societies, histories, and languages for a handful of races that still inform how they are depicted today. Elves are ancient, beautiful, and have pointy ears; dwarves are short, tough, and love to use axes; orcs are filthy brutes who live for destruction.
Of course the original readers couldn’t hear what Tolkien’s creatures sounded like, but the intense focus he placed on developing their languages gave people a pretty good idea. “Tolkien was a philologist,” says Olsen.“This is what he did. He studied language and the history of language and the changing of language over time.”
Tolkien would create languages first, then write cultures and histories to speak them, often taking inspiration from the sound of an existing language. In the case of the ever-present Elvish languages in his works, Tolkien took inspiration from Finnish and Welsh. As the race of men and hobbits got their language from the elves in Tolkien’s universe, their language was portrayed as similarly Euro-centric in flavor.

Tolkien was only partially responsible for the accents of his creations. He did establish that they sounded different from each other, but what those languages sound like changed over time as various interpreters added their own ideas. Did you know that Tolkien imagined dwarves sounding like Israelis? Read about the evolution of fantasy characters and how they speak at Atlas Obscura.
Posted by nacktman at 5:20 AM