The Lost Version of 'Dracula' 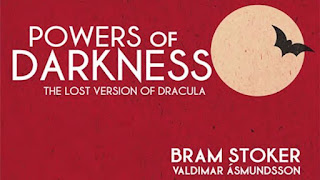 Author Valdimar Ásmundsson translated Bram Stoker's novel Dracula into Icelandic in 1900, when the novel was only three years old. He called it Makt Myrkranna, which means Powers of Darkness. It was little-known outside of Iceland, but has been re-translated into English and is now available as Powers of Darkness: The Lost Version of Dracula. It is very different from the novel we know.

For context, Powers of Darkness, which has been published in English by the Overlook Press, spends over 75 percent of its length detailing Thomas Harker’s (not Jonathan) stay in Castle Dracula, which is devoid of two of the Count’s famed brides. Luckily, it is occasionally filled with secret half-ape vampire relatives who seem to worship demons while sacrificing half-nude young girls in the basement with “lascivious” glee.
If only Francis Ford Coppola had known about this 25 years ago, no?
In Powers, Dracula is a Darwinian strongman who admires socialists and anarchists, yet simultaneously wishes to rule them while ushering in a new world order through a secret international conspiracy teeming with Napoleonic undertones. Ásmundsson even unintentionally anticipated the elements that cinematic storytellers would gravitate to in the ensuing century: the suave continental villain who makes parlor room visits, and the erotic ecstasy he and his ilk tempt all in their path with. The shadowy unkempt cadaver of Stoker’s novel takes on a militaristic authoritarian sheen here that is both undercooked and fascinating.

So how did that happen? Was it embellished, a work of fan fiction, or did Ásmundsson use an earlier draft of Bram Stoker's Dracula? Read about the mysterious new publication and its history at Den of Geek.
Posted by nacktman at 12:11 AM