The Cheapest House For Sale in San Francisco is a Fire-Gutted Wreck for $499,000 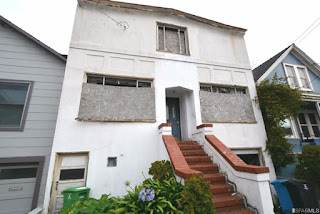 If you want to buy a house in San Francisco, you better have deep pockets. The median listing price of a detached home in the city is currently $1.15 million dollar according to Zillow (renting isn't much cheaper either, with median rent list price of over $4,000).

But deals can be found, like this house in the Excelsior District, which is currently listed for sale at a mere $499,000. It's a steal, if you're willing to overlook some negatives ... like being completely gutted by a fire, for example.
Take a look at what half-a-million bucks would get you in San Francisco, which Curbed SF identified as the cheapest house for sale in the city right now.
Posted by nacktman at 12:05 AM