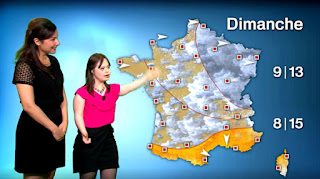 A lot of people want to be on television, but for Melanie Segard, a young French woman with Down syndrome, her lifelong dream of being a weather forecaster seems impossible to realize.

But thanks to a Facebook campaign called #MelaniePeutLaFaire or "Melanie Can Do It," she became France's first ever weather forecaster with Down syndrome.
Jennifer Earl of CBS News has the story:


Within hours after posting her request on February 26, her page went viral with more than 100,000 likes. Over the past few weeks, Segard’s page has grown to nearly 250,000 followers, and she proudly announced last week that she would be France’s first-ever weather presenter with Down syndrome.
"I'm different, but I want to show everyone I can do a lot of things," she wrote on her Facebook page. On Tuesday, Segard did just that. "This is it. I did it. I'm finally a weather girl," Segard said after making her debut on France 2.