The Most Interesting Camel in the World 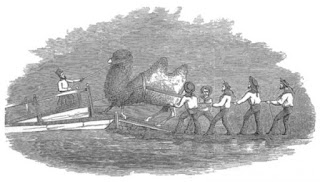 What can a camel do to make itself stand out against the rest of the herd? Topsy did it all. The Bactrian (two-humped) camel came to the United States in the 1850s with one of the shipments of camels that became U.S. Army’s Camel Corps, formed to haul supplies for road-building. The camels scared horses, and settlers, too.

Their human companions, though, were charmed by their personalities and hauling skills. “As individual units became familiar with the animals, they were really quite fond of them,” says Johnson. As the expedition moved along, Topsy and her fellow camels lugged supplies and tools, and the humans cleared rocks and brush out of a continuous ten-foot swath, laying out what was then known as the “military wagon road.” This track would eventually become the westernmost part of America’s most famous highway: Route 66. “You can attribute Route 66 to the camels in this way,” says Johnson.
The Army, impressed with their new recruits’ performance, retained hope that they would be an asset in military situations as well. The camels’ endurance and speed—especially compared to that of the horses and mules that had accompanied them on the road-building journey—convinced the army that they’d found “a new superior weapon,” says Johnson. But before the camels could prove their worth in this way, a more pressing conflict boiled over: the Civil War. The resources that the Army had dedicated to the camels were needed elsewhere, and the project was disbanded.

Topsy the world traveler and road-builder, along with her Syrian handler Hi Jolly, was then put to work in the mining industry, then in a circus, then in a zoo. She lived to be an estimated 81 years old when she died in 1934. Read the saga of Topsy the camel at Atlas Obscura.
Posted by nacktman at 12:04 AM